The increasing dominance of OTT is backed by rising user acquisition rate in AVoD. 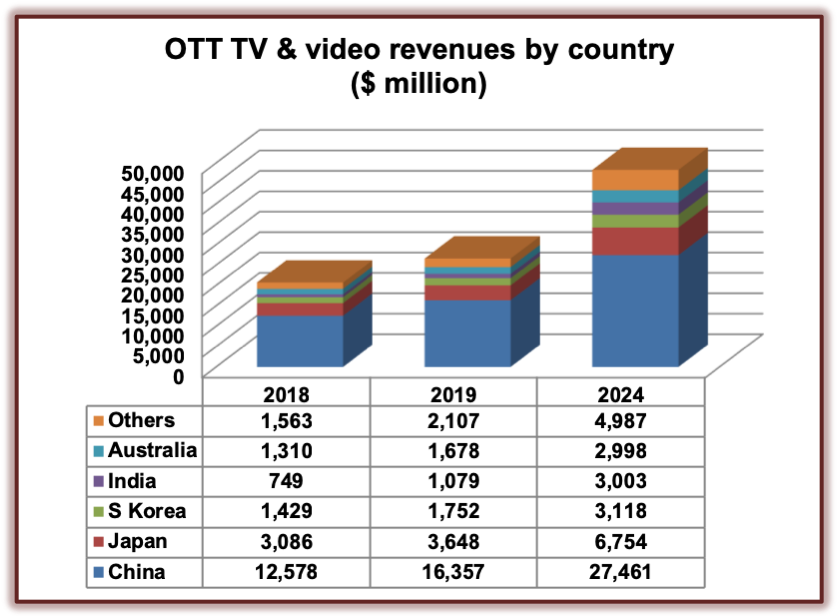 Incremental revenues of OTT by country

Unlike SVoD, AVoD operates without a subscription model, and more viewers enjoy the flexibility of switching between different platforms to watch free content. The Video Advertising Bureau (VAB) also reported higher AVoD views with the proliferation of Smart TV, smartphones and other mobile devices. Hence, the combined effect of the factors led to an increase in user acquisition.

AVoD distributes revenue by the number of views among the platform and ad agencies. Some platforms take on the role of ad agencies, by serving personalised ads of the brands to target audience. Thus, the platform achieve omni-present marketing and enhance the revenue received.

Despite the push for ad-free subscription, SVoD platforms have realised that most consumers prefer to only pay for original content — Stranger Things, Black Mirrorand more. Currently, SVoD is experiencing intense competition as each SVoD offers its own competitive rate and content.

Last year, Big-3 SVOD and the Original Content Arms Race – Analysis & Forecasts, a report published by intelligence specialist The Diffusion Group, reported that the amount invested in original content will triple to $10 billion annually and develop into a ‘content Arms Race’ for the Big-3 SVoD.

Brad Schlachter, senior advisor at The Diffusion Group, told APB: “It is critical for SVoD services to produce their own original content to differentiate themselves from the growing number of competitors entering the space.”

Consumers are facing increasing difficulty in managing multiple SVoD subscriptions and OTT providers ought to work together to provide easily accessible contents — or risk losing viewership to AVoD.

Digital TV Research has also affirmed that SVoD will supply 39% of OTT revenues by 2024, while AVoD will account 52%.

Simon Murray, principal analyst at Digital TV Research, said: “Assuming each SVoD subscriber has more than one subscription, we forecast a user base of 407 million SVoD subscriptions by 2024.”

Based on the number of subscribers, three Chinese companies will top the Asia-Pacific SVoD rankings in 2024 — two of whom will have a subscriber base of more than 100 million. Surprisingly, Netflix and Amazon Prime Video will take fourth and fifth places respectively.