This is the first time that BBC Sports used a single production workflow to broadcast in HD SDR and 4k HDR. The general practice is to use UHD cameras with HDR and SDR output and pass it through parallel workflows.

The dual workflow works well but it is more costly and complicated. Parallel construct requires double the equipment and complex signals linkage. Thus, it is unsustainable, and the BBC has been testing single production workflow for some time.

The BBC believes that being flexible in visual formats is an integral component to the success of single workflows. It deployed Grass Valley LDX-86N in HDR mode and SDR BT.709 as the super slow-motion camera during the FA Cup Final on May 18. Thereafter, the shots were stitched seamlessly in the main production workflow to negate colour and brightness differences.

As being format-agnostic is a critical success factor in working out a single-workflow model, Andrew Cotton, principal technologist of BBC R&D’s Broadcast & Connected Systems section, told SVG Europe: “For football coverage, it is simply not possible today to have everything in one format because we rely on a number of specialist cameras … we need to be able to integrate these into the main production seamlessly so that there are no perceived colour or brightness differences.

“What we’ve been working very hard on for the Cup Final is matching BT.709 sources and HLG HDR sources. And that requires ‘scene light’ conversions.

The answer, according to Cotton, is to “base it on the light that was falling on the camera sensor — that light will always be the same — and you work backwards towards the camera sensor rather than forward to the monitor.

“The greater understanding of when to use scene light and when to use display light has allowed us to use HDR in the more complex mix environments that are required for football,” explained Cotton, adding that all the format conversions were carried out in 3D LUTs. 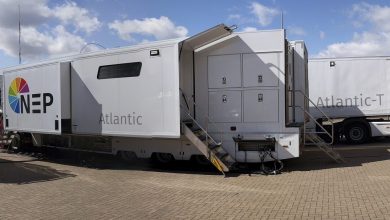 Imagine in just 1RU fitted with SNP you get 8 UHD conversion channels?