What would be a better way to discover other parts of the world now if it is not possible to be there in person? While video already enables viewers to travel around the globe without leaving the comfort of their homes, live video brings them directly to live events, in real time. Josephine Tan discovers how live video streaming is opening up new broadcasting opportunities.

People love watching TV, undoubtedly, as it is a fascinating form of entertainment for them to temporarily escape from reality. But in the 21st century, the term “watching TV” is being entirely redefined.
While TV itself still remains as the black box sitting in our living room, the programmes it has traditionally been transmitting can now be delivered across a wider variety of media — ranging from smartphones to tablets, as well as smart TV sets. And with the advent of network mobility and advanced technologies, consumers can now access their favourite TV programmes and channels anytime, anywhere.

Streaming is one technology that can be used to enable the delivery of video across multiple screens. It involves the transfer of video data, as a continuous stream, via the Internet. From the end-user perspective, streaming allows them to watch the programme in real time, without the need to wait for the entire file to be downloaded.

Video streaming was thrust into the limelight in 2005, the year when YouTube was founded. Over a decade, the video streaming website has launched local versions in more than 88 countries, and can be accessed in 76 different languages. To date, according to YouTube, the service has garnered over a billion users — which is equivalent to almost one-third of all people on the Internet — generating more than one billion hours of videos being watched daily on the platform.

In an attempt to bring the YouTube experience to live TV, YouTube has launched a TV streaming service known as YouTube TV. Available as a paid membership service in selected cities in the US, YouTube TV offers live TV streaming from broadcast and cable networks — such as ABC, CBS, Fox, NBC and ESPN — alongside content from YouTube creators. The service comes along with a cloud digital video recorder (DVR) with “unlimited” storage limit, enabling subscribers to record as many programmes as they want.

Another social media platform, Facebook, has also tapped into the video space with the launch of Watch, a new video platform for shows to be streamed on Facebook. Available on the Facebook apps, desktop site and on TV apps, Facebook Watch consists of shows that are made up of episodes — live or recorded — and follow a theme or storyline.

Although Facebook Watch is limited to a group of people in the US, Facebook has another live video streaming service that is available to the wider global community — Facebook Live. Using Facebook Live, users can create engaging conversations with viewers by fielding their questions in real time, and check out their live reaction to gauge how the broadcast is going.

“While these services are an important tool to increase reach and identify new viewers, they should not act as a replacement for a broadcaster’s own live video delivery infrastructure. Used as an exclusive distribution channel, these services effectively strip broadcasters of their direct relationship with the viewer, and prevent them from having exclusive control over advertising.”

In order for broadcasters to maintain rapport with their viewers, Lederer stresses that broadcasters must remain in control of their own distribution channel. He explains: “Deploying self-branded over-the-top (OTT) services are currently the most effective way to maximise the viewer experience, and build a more personal relationship with each subscriber while ensuring the broadcaster remains in control.”

Declaring that OTT is an “entirely different ecosystem” compared to traditional linear TV, Lederer suggests that OTT offers more possibilities when it comes to monetisation while creating a more dynamic product to enable broadcasters to engage with a more versatile audience.

Scalability is another area that is “radically different”, he highlights. “In the traditional sense, live broadcast is delivered across a few distribution methods, such as cable, digital terrestrial television (DTT), and satellite. However, there are millions of OTT-capable devices that broadcasters have to take into account when devising ways to take live video delivery from the TV to these new platforms.”
Lederer cites the example of the Super Bowl, one of the most viewed sports programmes on live TV, where the broadcast delivery infrastructure has to manage millions of concurrent viewers who are all expecting broadcast-like quality. In such a scenario where viewers have zero tolerance for poor viewing experiences, Lederer explains that the challenge can be solved through improved video optimisation and better compression of high volumes of data, to deliver broadcast-quality content to the viewer.

He continues: “Since the invention of TV, viewers have become accustomed to the linear, live nature of the medium — watching events as they unfold was synonymous with TV itself. However, due to technical complexity and bandwidth limitations, the first generation of online video in the early 2000s was almost exclusively on-demand, losing one of TV’s most compelling attributes.

“Now, with video technology infrastructure providers, such as Bitmovin, broadcasters can provide live video content in an affordable and simple way — the same way TV was originally offered. Now that they have access to readily available tools, broadcasters are embracing live online broadcasting as a means to stay relevant within an increasingly crowded media landscape.”

New York-headquartered fuboTV is an OTT Internet TV service provider that focuses primarily on channels that distribute live sports. When building their video infrastructure, the fuboTV streaming team approached Bitmovin to provide a player that delivers broadcast-quality video experiences, and is capable of providing a consistent user experience across devices, premium content protection, and a flexible video encoding platform that does not tie them down to a specific hardware or cloud vendor.

As part of the deployment, Bitmovin provided fuboTV with a cross-platform video player, as well as cloud-based encoding and encryption via the Bitmovin Encoding Service integrated with BuyDRM. To maximise reach, the platform generates MPEG-DASH and HLS (HTTP Live Streaming) as streaming formats, while the digital rights management (DRM) systems from Microsoft PlayReady, Google Widevine and Apple FairPlay are used to secure content.

“Through our collaboration, fuboTV can focus specifically on subscriber growth while maintaining a streamlined workflow,” Lederer adds. “As our solutions and products are able to reduce the complexity of online video streaming, fuboTV can invest its resources and efforts in its main business and core activities.”

However, there is a difference between launching OTT video-on-demand (VoD) services and live streaming services, Shawn Carnahan, CTO and co-founder of Telestream, declares. He explains: “Broadcasters deliver both services over the same infrastructure of unmanaged networks — they are subjected to the same networking issues that occur in the content delivery network (CDN) that broadcasters might not own themselves.

“If it’s VoD, the infrastructure might take around five seconds to buffer up without the consumers noticing. Whereas, if it’s a live streaming of an event, these issues are much more noticeable.”
This brings forth the importance of quality of service (QoS) monitoring, according to Carnahan, whereby broadcasters need to be certain that the content entering the delivery chain is of high quality, and be able to identify where the content gets degraded by service issues along its delivery path.

He continues: “The time has come for all broadcasters to apply forward-thinking strategies in the creation of their streaming infrastructure. New platforms, formats, standards and delivery mechanisms are being designed every day.

“Machine learning technologies are being developed today that will shape the content we deliver, and our monetisation options. Broadcasters’ infrastructure should be designed to respond and grow with their business plans.”

Another crux when it comes to live event streaming is how the technology is able to enhance a broadcaster’s ability to be more competitive while generating more revenue, Carnahan adds.
“This is largely about targeting — adapting to micro-casting, where broadcasters take their primary live content and provide dozens of feeds, each of which is targeted at a very specific audience within a demographically and geographically diverse region,” he elaborates.

“Despite each country, or region, having different content requirements, moving from broadcasting a single channel to broadcasting dozens that are more narrowly focused channels enable better targeted advertising, which in turn provides a larger total ad yield for the broadcaster.

“Although each channel may only target around 1,000 subscribers, but when a broadcaster does this over hundreds of channels, they can generate really significant revenue streams.”

But to retain audiences, the key challenge is maintaining the quality of experience (QoE) across all the channels, Carnahan adds. “Today’s workflow tools can assure quality, and provide corrective tools.
“However, to achieve this level of quality efficiently, broadcasters need to employ intelligent automation. Automation is the difference between simply extending reach and actually creating meaningful monetisation opportunities.”

Titled Unleashed, the programme has expanded into a full-fledged community TV station, branded as WCTV19, which can be watched on the school’s campus-wide TV channel, as well as on two local cable channels, and on the school’s social media outlets.

Ben Barnholdt, teacher/director of the broadcast media programme at Whitney High School, says: “I want our students to develop classroom-to-career skills, and to get a feel for every aspect of broadcast news production in a professional atmosphere. This programme is designed to teach them broadcast journalism skills, and then apply those skills to actually producing all of the features and content that we need to make Unleashed a professional-looking newscast.”

WCTV19 streams to other online and social media destinations via ESE Networks, a CDN and Tele­stream partner. Using a specific hashtag, students are able to post pictures and video to social media, such as Twitter and Instagram, which the Unleashed team can aggregate. They capture on-screen graphics and video clips of interest from their social media sites using Telestream’s ScreenFlow. These assets are then moved into Wirecast, which keys them into the blue-screen background on-set.

“Wirecast enhances our show by allowing us to chromakey news graphics and videos into the blue screen behind the anchor desk. It also makes it easy to display CG text and lower-third supers, and add transitions and effects, all from a single user interface,” Barnholdt concludes. 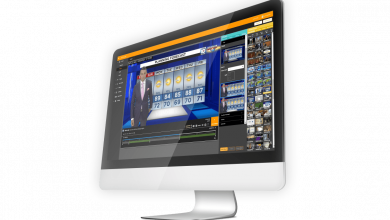 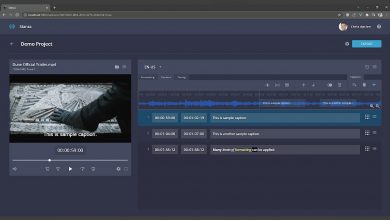